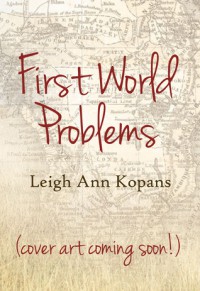 Sofia's had a really rough year - busted for cheating at prep school, dumped - dumped! - for the first time ever, and her new non-profit working stepmother is turning out to be an uppity bitch.
She deserves to treat herself. But when she throws herself a birthday party with 20 of her closest friends in Paris and (accidentally!) maxes out her dad's credit card in the process, he’s had enough of her attitude. As punishment, he switches her planned gap year touring Europe to one doing community service work with the evil stepmother’s relief organization in Guyana.
The rural village of Dabu needs help in every area from education to getting safe drinking water. But Sofia’s more concerned about her roommate Callum, the gardening expert, who calls Sofia "Princess" and scoffs at her distaste for sweaty, muddy, iguana-eating, outhouse-using life in Guyana.
Eventually, life on the equator, her work in the village, and especially Callum - with his brooding eyes and bewitching New Zealand accent - start to grow on Sofia. Life is rough in Guyana, but it’s roughest on the girls, whose families are too poor to send only the most promising boys in school. They’re trapped in a cycle that will keep them from ever making a better life for themselves, or for the village. Worse, Callum doesn’t seem to think any of the changes Sofia envisions are actually necessary.
Determined to change the girls’ futures, she comes up with a strategy to help them and, ultimately, the village. But what starts out as a plan to convince Callum and her father that she’s fallen in love with Guyana, turns into the realization that maybe she’s falling for Callum, too. And that by changing these girls’ lives, she might also be changing her own.

You guys know how much I loved Solving for Ex, so of course when I heard she was writing a companion about Sofia getting what was coming to her, I had to have it. And it did not disappoint.

This was interesting to begin with, because if you've read Solving for Ex, you already have an opinion of Sofia. And let's face it, it's not a pretty one. Which means its going to take a lot more for her to win you over, to prove that she's changed. I will say, I admire that Sofia knows what she is and doesn't try to hide it. She knows that she's manipulative, and she has perfected it down to an art form. She knows her father just throws money at her and her twin, Vincent, to "make up" for her mother dying, but she isn't above taking the money and making him pay for mentally checking out of their life. But when Sofia makes him pay a little too much, her dad takes notice and decide he's had enough. So, he cancels her year abroad in Paris and makes her go volunteer for her stepmother's company in third-world Guyana.

Sofia is very hard to like in the beginning, but she's supposed to be that way. She's used to being the queen everywhere she goes. She's used to her money and looks being able to get her everything she wants. But, now she no longer has her daddy's money, and for some reason, her usual flirtations aren't working on the only boy in this awful place, Callum. But Sofia knows how to play her cards right: play along enough for Callum to send good reports to her stepmother, and she can get out of this place early. But she never thought that she would fall for Callum and Guyana.

Seeing Sofia struggle in the beginning was, I admit, humorous. But I have to hand it to her, she did survive. Here she is, thrown into a place with no running water, no toilets, much less any of the luxuries she was used to. Heck, I don't know if I could do that well. But Sofia proved that she wasn't just a dumb cheerleader type persona (cue Taylor Swift...I got nothing in my brain...at least that's what people say....mmhmm). She decided that she was going to stick it out and prove to everyone that she wasn't just a "princess". And she did it.

And Callum.......I loved watching their relationship progress from not being able to stand each other to falling in love. It was definitely fun and entertaining to watch them banter back and forth, but also had its sweet moments. I loved that the relationship didn't progress too fast, but worked perfectly for the book, even adding to the plot instead of taking away from it like I so often see romances do sometimes in books.

I also really loved all the characters in this book, from the bus driver to the other housemates, to the little girls that Sofia falls in love with in the town. It's obvious that a lot of research went into writing this book, to write the town and the people and the problems they face so accurately.

But I think most of all, I loved seeing how much Sofia changed. From being the spoiled princess that she was, to actually seeing the townspeople and their troubles, to wanting to help them. It wasn't an unrealistic change that happened over night, but one that happened gradually, so that we could really see that she was genuine.

So yes. I looooved this book. I loved everything about it. And while I may never love it more than Solving for Ex, it was pretty darn close. Plus, I hear the finished version has pictures. I mean, you can't beat that.